The ascent of Mount Tsrasar

Mount Tsrasar is situated on the border of Shahumyan and Kashatagh regions with a height of 3616 meters. It is the fourth mountain of Armenia at altitude. Information about Tsrasar, especially about its ascents, is almost absent. Before we climbed it, we found  information about 2 ascents and 1 trial of ascent. 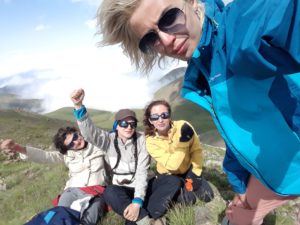 The other information we could find was a description of Vahe and Artiom’s trial of the ascent. They had been near to the top, but they came back on July 30, 2014. About the third ascent (according to our researches) we found the team of Ariga Arakelyan, Angela Chagharyan, Shushan Rubenyan and Narine Chagharyan.

Developing the ascent of Tsrasar plan, we decided to do it on July 7-9. We left for Yerevan on July 7. We did not go to Karvachar, we headed toward by the left road to Djermajour (Istisu).  Djermajur is famous for its geysers, it was a resort in Soviet times, it is at a height of 2200 meters. Before getting to Djermajour the road is open for cars. This part of the road is not complicated, the overcoming of the height is gradual and little. This day mostly solved a distance problem than height. In this part of the road we crossed the river Tharthar (Tartar or Trtu)  three times. After walking 5 km we put the tent at a height of 2470 meters. Right in front of the tent was a massive massif  with a beautiful peak. At first we thought that Tsrasar was in front of us, but on the day of the ascent, we realized we made a mistake. The heavy rains began in the evening. On July 8, according to our program, we had to start the ascent and that’s what we did. Fortunately there was no rain, only the grass was wet, and sometimes the clouds were accumulating. The place was covered with high grass cover, especially near the river. When we approached the supposed Tsrasar, we turned to the right south-east. In that part Tartar River is divided into the Northwest and South-Eastern branches, the watershed of which is the Tsrasar mountain range. We walked down at the foot of Tsrasar southeastern slope both the riverbed and the traverse passage of the slope. We could not avoid to escape passing the river several times here. After walking for about three hours, the peak began to appear. From the tent point (2470 m) up to 2950 m the ascent was not abrupt, but it was expected to rise by 25-30 degrees from 2950 m. At a height of 3200 m the wind was blowing and the weather began to change at the down, the clouds had fallen down from the top and it was clear that there would be a fog during coming back. The slopes of the top at the height of 3300 m were already rocky. After walking 5 h. 40 min.  we were on the top,  abnormal sounds were heard on the top because of the split of the soul. We screamed arm in arm. Because of the clouds we could not see the Syunik Plateau and other altitudes, but instead we enjoyed the game of clouds. We walked 7.5 km, 1146 m height up to the peak. We have left a mark, made by us, for the next upgraders in the package for scripture. We started to descend, and we found ourselves in the cloudsat a height of about 3000 m,which were transformed into a fog of natural disaster.  The return lasted 4 hours: damp grass cover, dense fog and the tread of the passing traverse made us be careful. We had decided in the morning, when we arrived at the tent, we would pick the tent up and return to 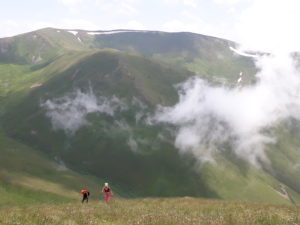 Djermajour, but when we reached the tent, the only thing we wanted was to get rid of moisture, everything was wet: shoes, clothes, callers  and even gloves. In the evening, around the hot soup, we enjoyed the pleasure of reaching the top, we discussed other possible routes of Mount Tsrasar and decided what would be the next peaks that would make us happy.

As a result we walked:

We returned to Yerevan on July 9.

Difficultiesand danger: 1. Getting to Djermajour by bus, 2. Stay in a location 32 km away from the nearest dwelling, 3. Understand that the area is accessible to the enemy’s entrance (in 2014, Azeri saboteurs entered this area and killed a boy at the age of 17. ) 4. Bears.  5. A soldier can think that you are a saboteur who speaks Armenian well and it doesn’t matter you are a girl or a boy (as in our case).

Advantages: 1. River water and mountain sources are suitable for drinking 2. Coming back you can enjoy geysers and after it you will forget about your tiredness 3. Meet very good people (of course, after Djermajour you will not meet any people).