Together with the desire to be at all peaks of Aragats above 3000m, we decided to traverse Geghama Mountains.

Studying the various maps and the concise dictionary of physico-geographical objects of Armenia, we comprised all official and non-official peaks and nominal points above 3000 m Geghama Mountains. 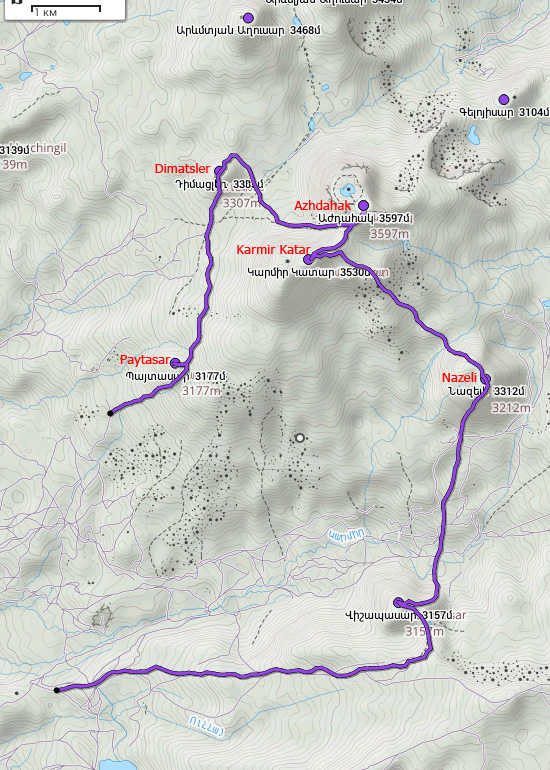 We started the extradition with ArmGeo. We went up the highway to Geghard from the village with a group of hikers. When the truck turned to the lake of the monastery, we separated from the group and started the walk.

We reached Vishapasar quite quickly. We walked from Vishapasar to Nazeli in the shortest, but relatively high, the longest way, that is, we descended straight into the ravine and started climbing.

The next waReKarmir Katar, where we met the expedition group members and walked together ttowars Azhdahak. We were again separated from the group and went to Dimatsler, then Paytasar, where the truck was waiting for us.

The six peaks in one day at that moment was a record for us.

We started the trip from Sevaberd village. We walked up to 2900 m, from where we used the snowshoes for the first time. The snowy mountaintop was attractive and exalted.

We reached Seghanasar easily, and shortly after we were at the peak of Geghmaghan, where there was a strong wind. The next was Yeritsasar, the eastern part of which was covered with several hilltops. The peak was found after two experiments. When returning we went to the peak of Pahakasar, after which we landed at Sevaberd.

We started our first winter upheaval of Geghama early when the sun did rise. This time the snow was fresh and quite brittle, and it was not easy to move forward even with shnowshoes.

From Sevaberd to Akna Lake, we crossed the road at the foot of Seghanasar and Geghmaghan. The lake was completely covered with snow and was almost invisible. A thin fog dropped off, after a slight deviation, we found the way and went up to Ltchasar. During the few minutes we have been on the top, the weather changed several times, which let us see the nearby peaks. From Ltchasar, we went directly to Aknasar along the shortest route. It was not the best solution in this kind of weather; we struggled a bit, than overcome the snowy slope of the shortest route. A magnificent view from to Lake Sevan was appeared from the peak.

From the river Akna we started to come back trough the north of Lake Akna. At the bottom of Seghanasar we saw our footprints , and on the same path we reached Sevaberd until the sunset. 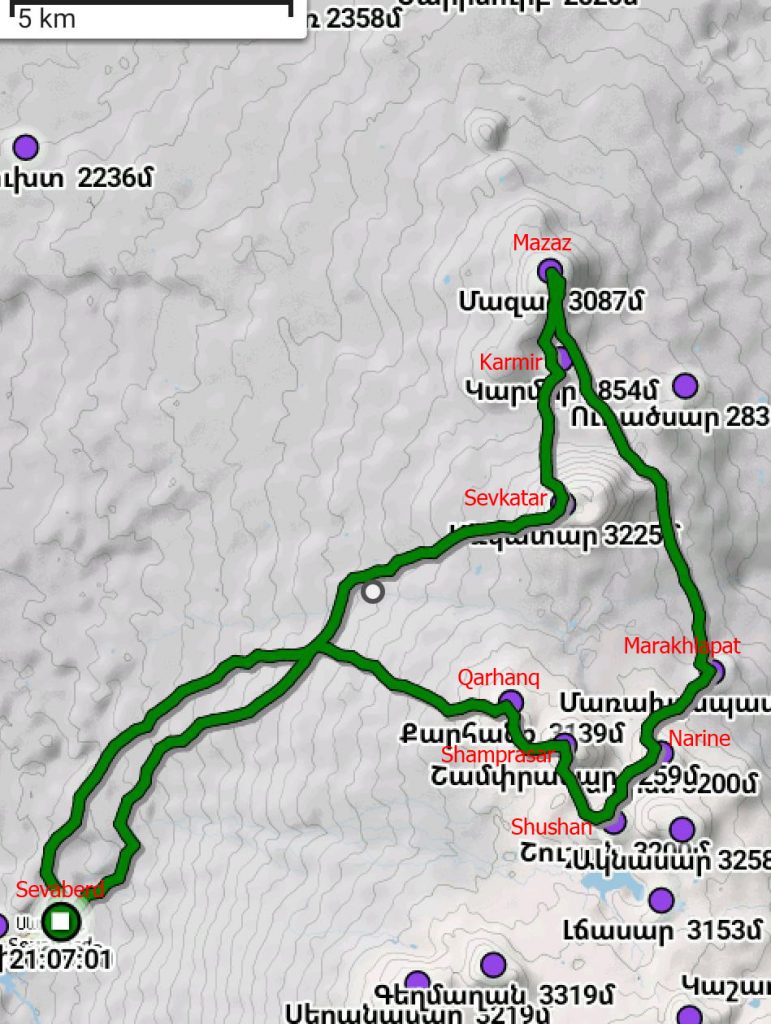 The weather did not inspiring us in the second half of the day, so we startedthe expedition very early, depending on the weather, with several programs.

From Northwest to Sevaberd we planted at least the northern peaks of our list – Sevkatar and Mazaz. We first came to Sevkatar, which was totally in fog. After a short rest, we came down to the north. On the way there was the Karmir, a small peak we climbed as a relief. Mazaz was also covered with clouds and we had already put up with the idea of ​​being satisfied with the least. But the wind was pretty fast, and when it reached the peak it turned out to be just the opposite, the clouds were scattered and everything became visible. There was no fog anymore, and we moved toward the Fog.

We walked through the fog to Narine, then Shushan mountain peaks. These beautiful peaks have not officially been named, and we have previously recorded them as Narine and Shushan, in honor of two mountaineers who have invested greatly in Geghama mountain tops, during which they were the first to raise their anonymity.

We went 34 km on the shores of Shamprasar and rose to more than 2000 m. We were tired, there was a time when the wind was blowing, and there was still a long way back. It was rather brittle, small stones were running away from their feet. We went slowly but decisively, realizing that there would probably be no chance of overcoming 7 peaks over 3000m hight in one day. The great desire led us to the top. The last one was left.

The Karhank was close and not too high. The only obstacle was the volcanic large stones, which moved slowly and demanded great attention. Succeeded on the peak. It seemed incredible at that moment. Now we only have to go back. Again a fog dropped. We started to descend as quick as possible so that we can get out of the fog and be visible. After walking for such a ling time, the road seemed endless. It was already dark, and we came to the grave that appeared in the light of the lamp and came to the village cemetery. We would never have thought that reaching the cemetery at night might seem even pleasant. We were in the village of Sevaberd.

It was an unprecedented rise. Crazy and nervous, tired, dead, but happy … 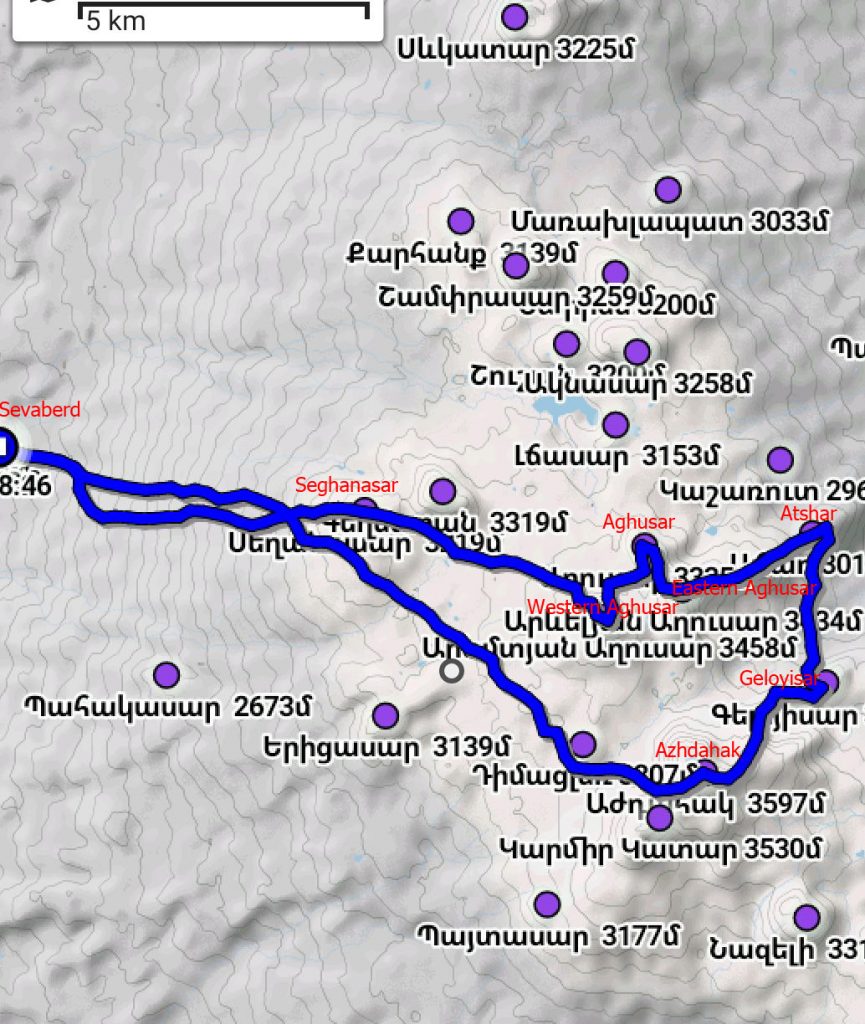 This time the target was the Aghusars.
We starting the ascent from the village of Sevaberd, where we have ben before. The weather was fine, and a magnificent view was appeared from Seghanasar, where we could see only mountains. We rised in turn to Western Aghusar, Aghusar, then Eastern Aghusar.
It was covered with sbow somewhere,there were small stones and it was slant somehow. From the Eastern Aghusar we continued sthe route to Atchar, to rich it you go down nore then you rise. We continued the route and reached Geloyisar. It is situated on the eaatern side of the mount Azhdahak, from where, a great view appears to Gridzor and Azhdahak.
We were done with the program of the day. The weather was cool, and although we did not plan in advance, but taking into account the late return we decided to climb another peak. The Geghama giant Azhdahak was waiting for us.
We rised to the top of Azhdahak through not traditional way: from the Eastern side.
The crater lake was mostly frozen, Spitakasar and Geghasar were greatly seen in the high, in half-snow. After half an hour, we went down to the western direction and returned to the village of Sevaberd at the foot of the Seghanasar. 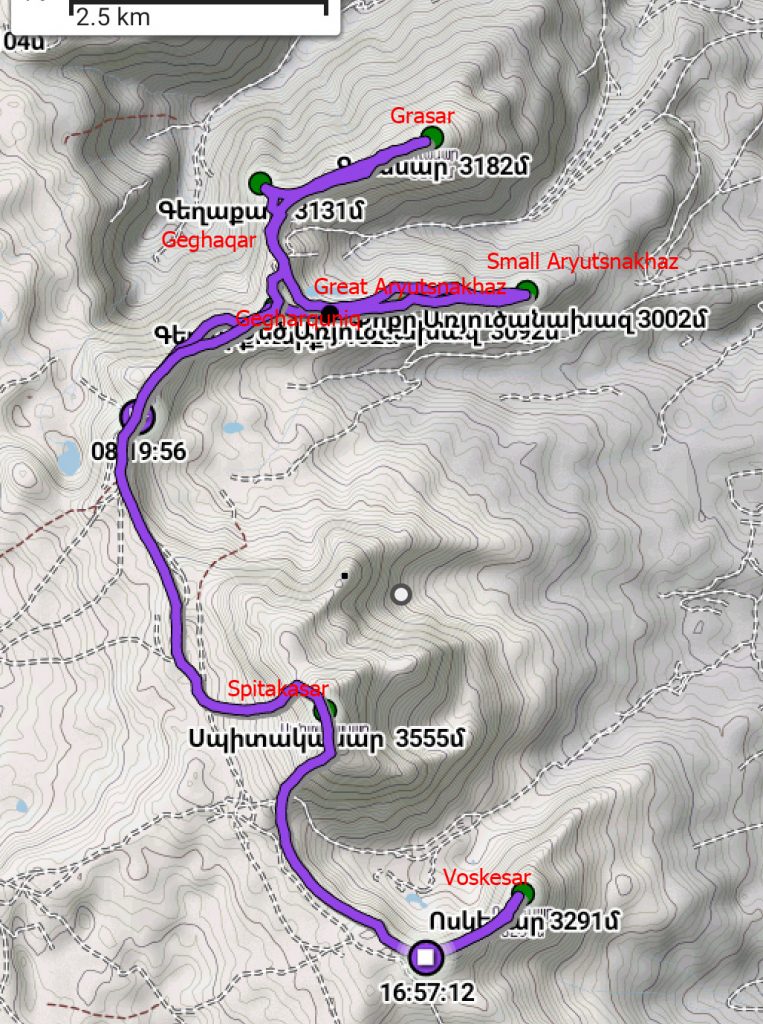 Not to waste a day, we approached to the peaks od Grnidzor with “Vilis” vehicle.
The upper part of Gegham’s was in the fog, we used a navigator, with the help of which we reached a gorgeous point east of the Badi lake, from which we climbed to Gegharkunik, then to the Great and Small Aryutsakhaz.
All three were on the same line eastward relative to each other. In the same way we returned to the foot of Gegharkunik mountain, from where the road was opened to the north, to Geghakar.
The fog was gradually fading out, and it opened before us a rocky, sharp, and non-standard, very impressive peak for Geghama Mountains. At first it seemed unreachable but found the most convenient way to climb.
The view from the top was great, first drifting down the slopes, from which Nazeli, Azhdakak and Aghusar were seen with all their majesty and magic. The sound of the river breathed into it, and when the birds were heard, we realized that Paradise was the paradise of Geghakar. Instead of 10 to 15, we stayed here for about 40 minutes.
The next was Grasar where the lake was seen through the clouds, then Spitakasar, the second and long-expected peak of the Geghama Mountains was quite easy. We did not stayed long at the top of Spitakasar, the wind was too strong, the black clouds were gathered, and Voskesar was waiting for us.
We climbed the peak, “congratulated each other”, and only then with we saw on the map that the peak was next to it and it was not visible due to the fog. We went on, went down and climbed up the stones. When we got out of Voskesar, we saw Aram, who had approached the car to us and waited for us. 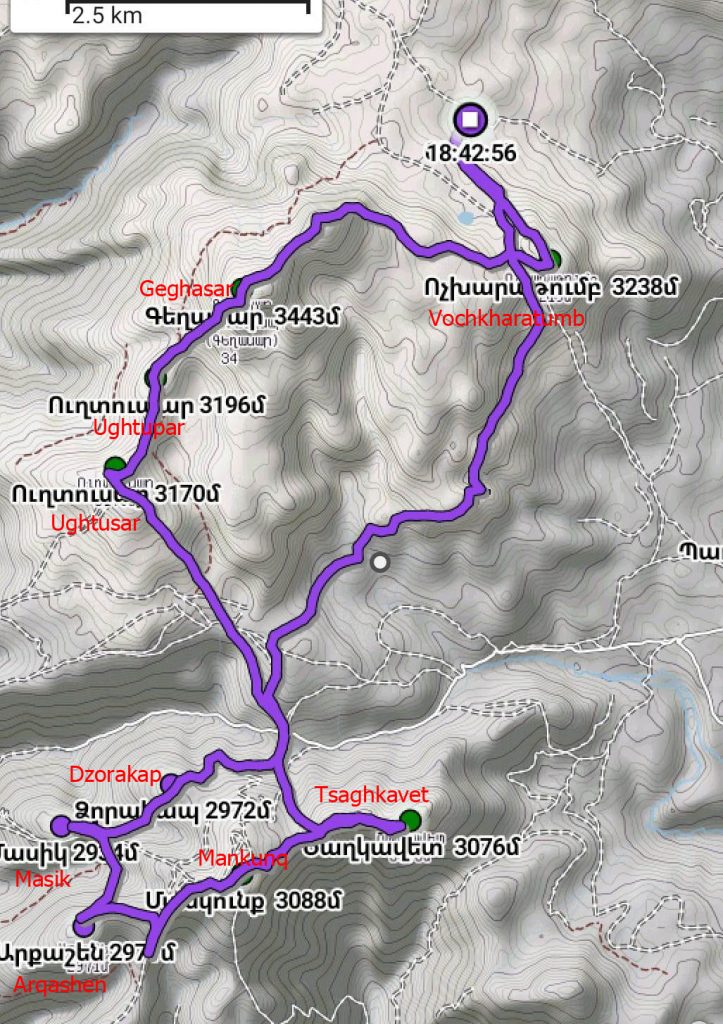 We were looking forward to our last trip to the peaks of Geghama Mountains, 3000 m high. This time we climbed up the “Vilis” vehicke ,approached the bottom of Vochkharatumb and Geghasar mountains, and we walked toward the peak of the Vichkharatumb.
We climbed up Vochkharatumb and from there, to Geghasar, which is one of the highest peaks of the Geghama Mountains, is quite extensive and impressive. From Geghasar we continued to the Ughtapar and Ughtasar, the peaks of which were hard to find, because they did not have a standard mountain view.
Then we went up to Tsaghkavet, here was a wonderful view to Khosrov Reserve.
The southest peak of Geghama Mountains, 3000 m, is Mankunk, which actually became the last point of our route. On the top there is a quay, and nearby there are semi-destroyed stone buildings.
Before we return, we decided to climb Arkashen and Masik, then Dzorakap Mountains.

We went to the starting point for about two hours by car. We enjoyed the sunset from Geghama. It was already dark when we were coming down with the car.

To  summarize, we can say with full satisfaction and somewhat of a sense of pride that we have realized that during one year (autumn 2, winter 1, spring 1, summer 3) we have ascended all the peaks of Geghama Mountains, as we decided while wandering inAragataotn.

We would like to express special gratitude to Narine Tchagharyan, Shushan Rubenyan, Tigran Shahbazyan and Aram Tovmasyan.