A Mount Aragats lover of hiking is known from Lake Qari (stone) to the southern peak. Slightly less than the Eastern, Northern and Western peaks. In terms of tourism with Amber, sometimes with the Gegaroth waterfall. In fact, Aragats is a huge mountain range with a perimeter of about 200km which has many peaks, lakes, rivers and waterfalls.

Having studied different maps, we decided to climb all the famous points and peaks of Aragats above 3000m. 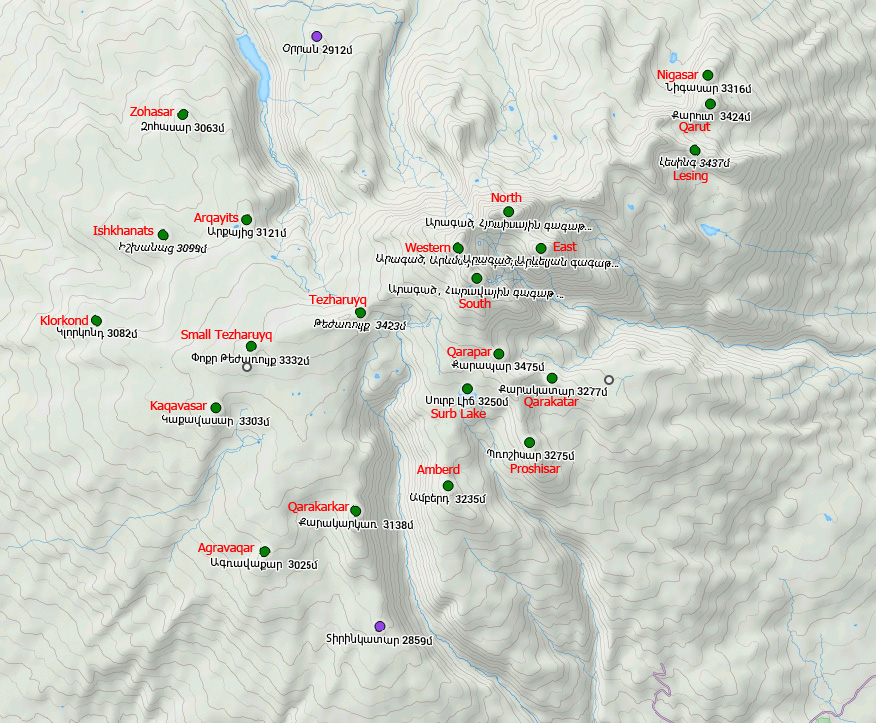 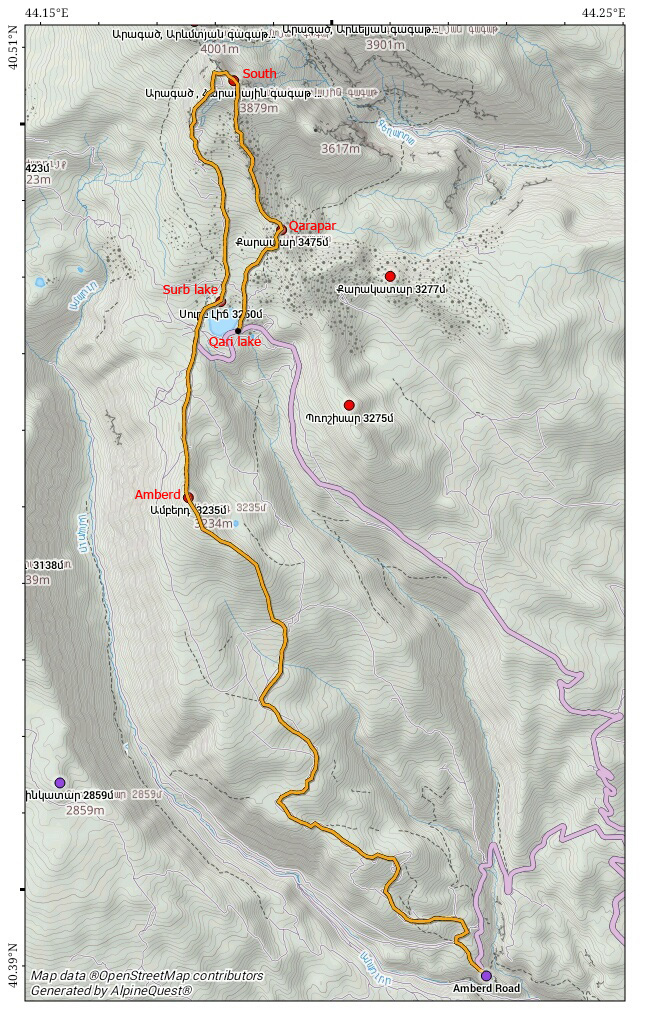 Our first campaign was three Aghasi Martirosyan, Hrach Ivanyan, and Levon Galachian was with us. Started climbing from 1.5 km to Lake Qari, from a height of 3100m. From the Qarapars Mountains, we ascended to the Southern Peak. At the beginning of June, the snow did not melt in the mountains. The road to the Southern peak was along the point Qarapar.

From the southern peak we went ashore Lake Qari. There is a ledge made of stones called Surp Litzh (Holy Lake).

The trek continued to the south and reached the summit of Amberd. The summit resembled the royal throne from the movie “The Game of Thrones”. 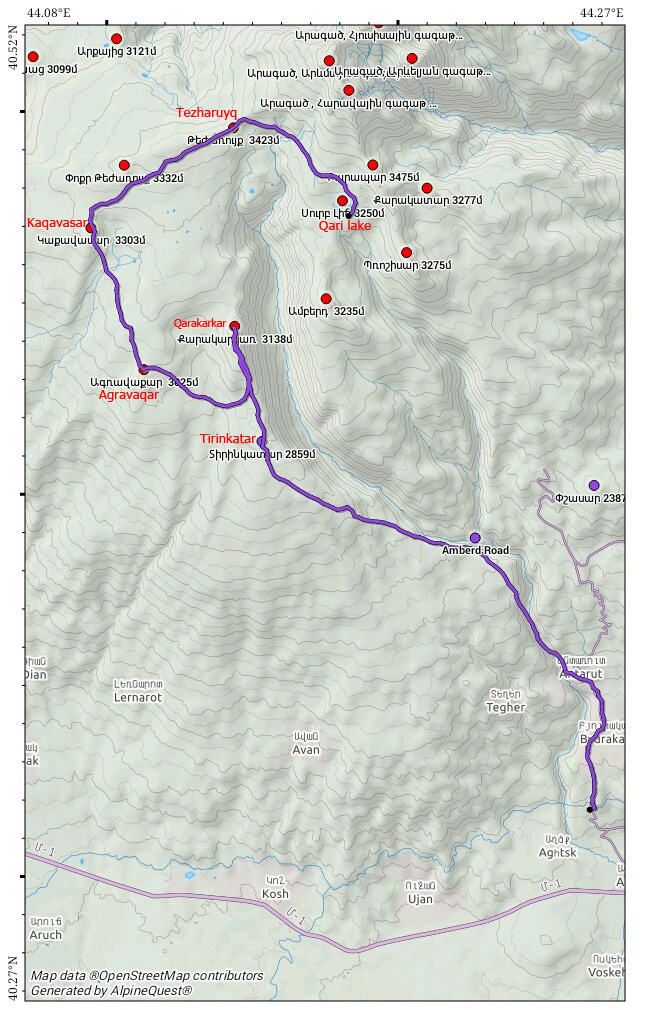 Our second expedition we began with Lake Kari and quickly rose Tezharuyq.

Tezharuyq on maps is marked as the highest point of the Tezharuyq ridge. From there, a beautiful spectacle of the Mantash reservoir and the top of Zohasar opens.

From Tezharuyq moved to Kaqavasar. The top of Kaqavasar was completely surrounded by a barbed gash. Perhaps in the Soviet years there was a military base.

From Kaqavasar passed to Agravasar. Agravasar is quite stony and unsightly. From there you can see a beautiful view of the 4 main peaks, and the canyon.

From Agravasar went down, and then climbed to Tirinkatar 2858m. On the slope of Tirinkatar there is an old cemetery, and on the top is a chapel. From Tiririnkatara to Byurakan, shepherds with their herds often went for a long time. 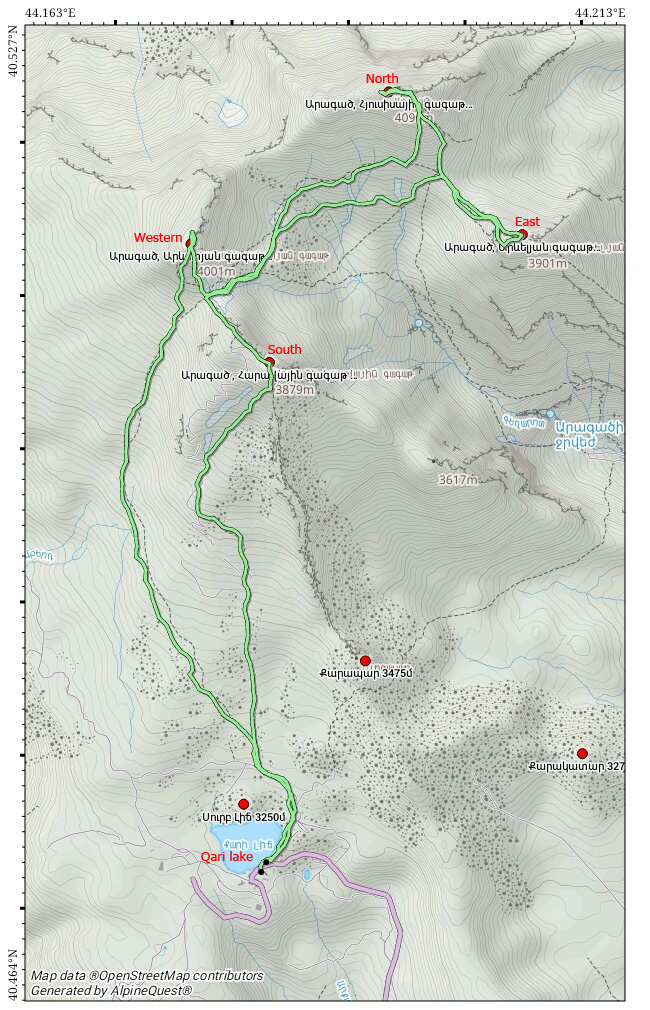 The third hiking. Alone passed through all four main peaks of Aragats. Hrach had twice crossed this path before.

The road leading from the “false” section of North Aragats to the present is 150 meters. The real peak is 4090 meters and it is 7 meters above the “false”. The northern peak of Aragats is the highest point in Armenia. 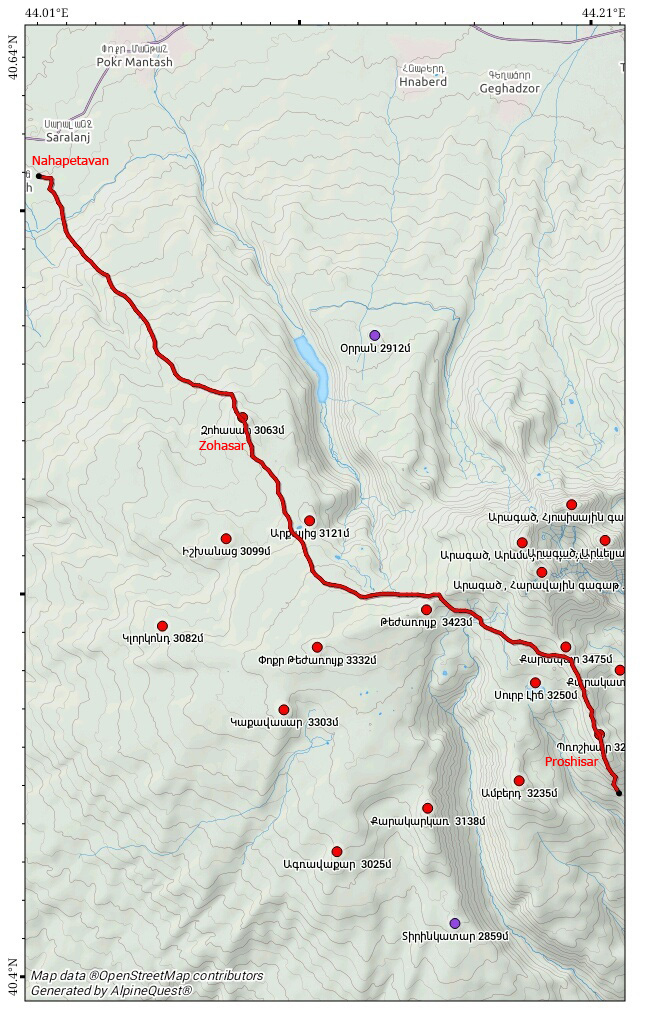 The fourth expedition began from a height of 2850m, 4 km before reaching Lake Qari. In the beginning we climbed to the top of Prosishar.

On the Qarapar Range passed 3 km. Then came down and went on toward Tezharuyq. The slope was covered with snow, and often it was easier to walk on stones than on the plain. Passed near Tezharuyq and went to Zohasar. It seemed close, but it only seemed. Marched 12 kilometer.

From Zogasara clearly visible Shirak region. On the one hand, the peaks of Aragats, where the winter, from another city and sat down, where there is still autumn.

Our trip ended in force Nahapetavan. 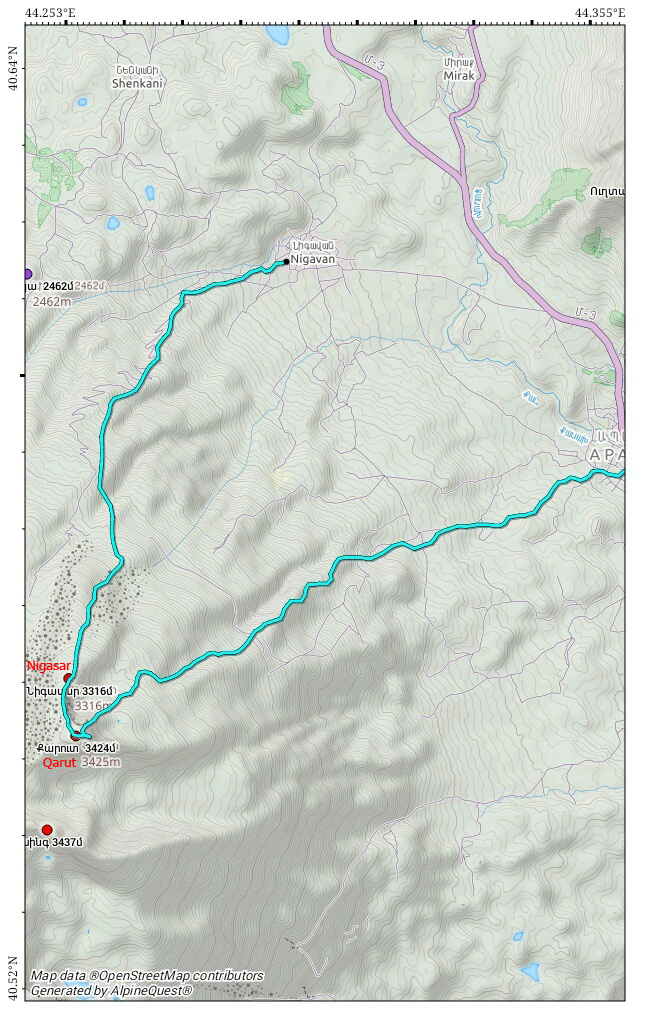 The fifth expedition was the only one where we did not see Lake Qari. We started from the village of Nigavan (2030 m). Our goal was Nigasar and Qarut. Information about Nigasara was contradictory. According to one source, the height is 3424 m, the other 3316 m. On different maps, the location of the vertices is in different places.

The geodesy was at an altitude of 3316 m, but this point can hardly be called the top.

Continuing the ascent, we reached the highest point of the terrain. There was nothing there, some big stones. The name Qarut justified itself. (Qar – Stone).

We decided to return in a short way. The first kilometer went for an hour. We walked along a steep slope, shaky rocks and brittle snow.

The final destination was Gntunik in Aparan.

The peaks of our 6th expedition were much more modest than their predecessors. From the Qari Lake Qarakatar, Small Tezharuyq, Klorkond, Ishkhanats, Arqayits, Tezharuyq and back to Lake Qari. From this expedition, a huge rabbit was memorable, which we saw on the road and the view to Arten. 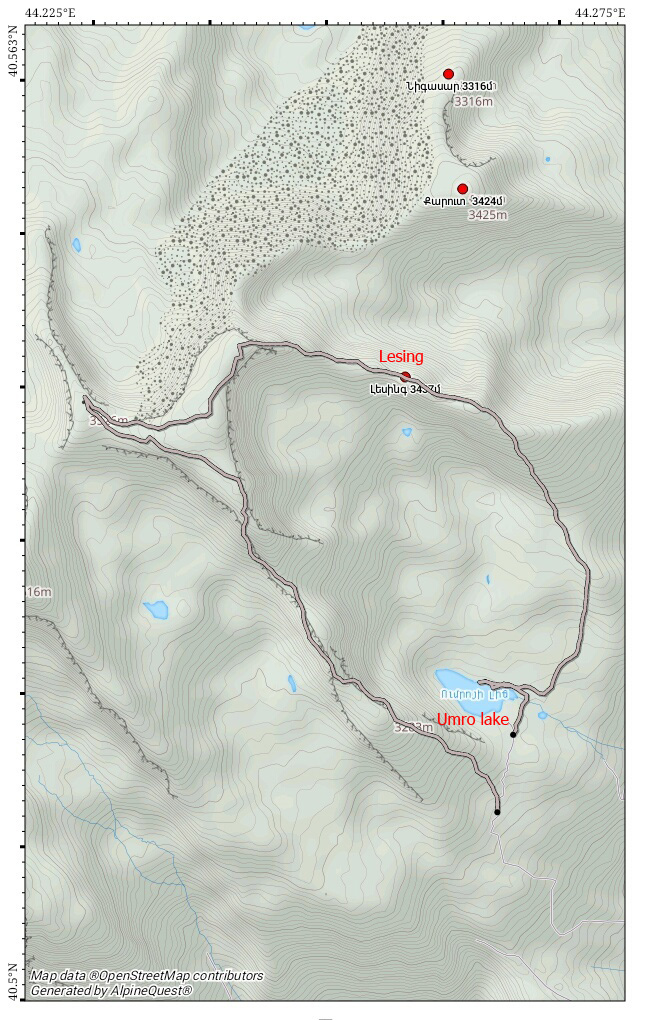 We started our latest expedition with ArmGeo. The truck approached the lake of Umra. First we climbed the highest point of the mountain, which is higher than the peak of the named Lesing, It is located above the lake with the same name. In the end we returned to Lake Umro and joined the group.

I think every Armenian mountaineer will be there at least once a year. After the third time, I was not above the South Peak. I had a fear that passed after the sixth time. Then I reached the real North summit. Every time I try to go for myself on a new route. With each rise, Aragats opens up for me on the new side. Now I’m in a different look at the Aragats. He became my family with their peaks, lakes, rivers… (Aghasi)

“With this approach, we did not open Aragats. During the year hundreds tourists and climbers climb the slopes and peaks of Aragats. Many have gone through these places. Our goal was to climb all the peaks and points above 3000m. Go through different routes to get a complete picture of the road map. Move away from the trails and discover the Aragats in all color dins. At the end, Aragats gravity “forcing” us to love and think about new ascents …” (Hrach)